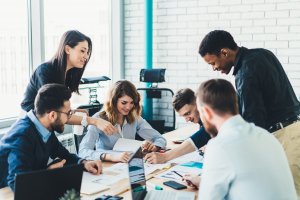 In their book Frugal Innovation: How to Do More with Less, Navi Radjou and Jaideep Prabhu show how global companies have accessed talent from developing nations, relying on their cunning and ingenuity to develop new products at high speed and low cost. This is heresy to most of the western world’s research and development departments.

Similarly, in his book Tribes, Seth Godin talks about the idea that managers settle and leaders disrupt. Let’s apply this to leadership at associations. Are many disrupters or frugal innovators? It’s possible. But “let’s get along” and “that’s how we’ve always done it” are strikingly powerful forces for today’s associations. Godin writes, “Our culture works hard to prevent change. We have long had systems and organizations and standards designed to dissuade people from challenging the status quo.” If that doesn’t describe so many of today’s associations, I don’t know what does.

In my experience, many associations want to become more relevant but either do not know how or have a stifling culture that values stodgy consistency over progress. That’s unfortunate, because heretics aren’t just bulls in the china shop. As Godin writes, “Heretics have a plan. They understand that changing the status quo is not only profitable but fun too.” Putting the ideas from Tribes and Frugal Innovation together got me thinking about the giant “mission-driven” associations like the American Medical Association; while specialty medical associations have steadily been rising in membership—for instance, the American College of Physicians nearly doubled its membership between 1995 and 2009, to 130,000—AMA has seen steady declines.

So, how do we embrace the heretics in our industry and organizations to help us grow, innovate, and become as relevant as possible, before they create new competing associations like the specialty medical associations did? Below are five tips.

Be Alert to Protectionism

Nonprofit governance is generally a hybrid of paid and volunteer leaders. Though this perhaps oversimplifies, I’ve found it to be true that the paid leaders have a more bureaucratic mindset while the volunteer leaders tend to be entrepreneurial. The two mindsets create healthy tension and generally guide the organization well.

The problem is when the volunteers and the paid leaders both have bureaucratic mindsets. Then, the organization tends to fear growth, improvement, or change. Also, when leaders are not confident in their ability to lead due to newness of tenure, knowledge, or skills, saying no to everything is much safer that saying maybe, let alone yes.

In order to successfully work with heretics, one must first understand their mindset. Some disrupt simply for the sake of disruption, but more often than not they want to drive positive change and growth. They see very different patterns and holes in your organization’s member value proposition and are in a hurry for improvement. They’re generally burning to make a difference and rarely are included in governing bodies because they’re seen as too difficult.

But, when you take the time to get into the heads of contrarians and see their perspective without the protectionism filters, you discover a world of new value propositions for your organization. Will it be easy to bring them into the fold? Not on your life. Fellow leaders that are in protectionism mode will only see threats, bullying, and coercion. It will be your job to help them see the potential for opportunity, innovation, and improvement.

Step Up Your Communication Skills

I recently served as the “voice of the heretic” at an ASAE Annual Meeting & Expo session, alongside Stacy Tetschner, FASAE, CAE, CEO of the National Speakers Association, who spoke as the voice for organizational principle. We lectured on our partnership failures and successes spanning a decade and a half. That kind of candor will be essential in attracting a variety of people, especially those heretics.

My involvement with NSA led to my helping create what I think of as a heretical party group, Cigar PEG, a charity fundraiser connected to the NSA’s annual conference. Over the years the NSA recognized that Cigar PEG was delivering high-level value by giving members one more reason to retain their membership and attend the annual convention. The party consistently draws 20 percent of the annual convention attendees, and NSA leadership, both paid and volunteer, realized that putting fewer roadblocks in front of it paid off.

Had someone a decade ago said that we’d be co-presenting at the ASAE Annual Meeting, everyone in NSA would have laughed hysterically or found themselves in mortal fear. But spokespersons for the establishment and heretics came together to share that they too could build bridges with their heretics, contrarians, dissidents, disenfranchised, and malcontent members. So can you.