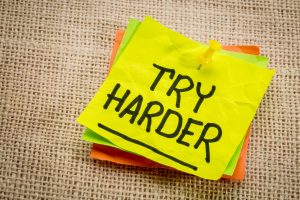 In the world of selling, the real cost of mediocrity can be extreme

In selling, there are generally two categories: hunters and farmers. The hunters are the sales people, both inside and outside, that specialize in going after new business—their thrust is the hunt, bringing in new customers. Farmers on the other hand specialize in nurturing house accounts and business that the hunters have brought in. Too often, organizations will settle for farmers that are mediocre, or careless and don’t tend to their crops. The prices businesses or organizations pay for allowing this kind of behavior are truly unnecessary.

My first real job in outside sales, other than selling encyclopedias door-to-door, was in selling to retailers. The owner of the business, Ray Kahn, once told me, “If you lose an account because you were out sold, it’s okay. But, if you lose an account because you weren’t paying attention to that account—you’re out of here!” He understood the real cost of mediocrity. Several years later, I saw first-hand that he meant it. Ray fired a hunter/farmer salesman, Mike that had been with him for a decade. Unfortunate for all that were involved, Mike got complacent and lazy, losing a major account because he wasn’t paying attention to the needs of the customer.

When a farmer doesn’t pay attention, it is an absolute travesty

Mike was an okay hunter, but not a great farmer. This situation is not unusual. If you manage sales people and you tolerate a farmer not tending to their crops (accounts), I believe that you are just as guilty as your farmer sales person. It is you, after all, to whom they are accountable.

Not long ago, I traveled to the American East Coast to speak on selling at a chapter of the National Speakers Association (NSA), of which I am a member in Los Angeles. This NSA chapter had been meeting at the same suburban area hotel on the same Saturday of each month for the previous three years. This particular Saturday in January was to be different.

The “you know what” hit the fan late Friday night

Following dinner that evening, my contact with the group dropped me back at the hotel where I was staying and where the meeting would be the next day. In passing, she asked if I knew that I’d be presenting the next morning in the hotel’s restaurant…during regular service hours…to the public? Their usual meeting room had been booked out from under them. Well, that was a surprise that was to me.

The meeting chair asked Lois how this could be? Especially since the group had been using that meeting room the same Saturday of the month for the past three years and had an on-going relationship. Lois answered by stating that she thought it was odd that the organization had not signed a contract for the coming year. Lois continued by stating that since the hotel’s customers “call them” she didn’t give it a second thought. Excuse me! If I was Lois’ boss, I’d do to her what Ray Kahn did to Mike—fire ‘em! There is no excuse for this kind of behavior.

That farmer, Lois, definitely was not tending her crops (accounts). Can you believe it? Worse, the sales person was ignorant enough to state, “Our customers call us.” She sold the room out from under this group. Perhaps because the group to whom she sold the room was generating higher revenue? Perhaps she was only mindful of her commission check? Perhaps it was her way of telling this NSA Chapter that they were no longer welcome at that property? This clearly demonstrates mediocrity.

The Real Cost of Mediocrity

What do you think might be the real cost to the hotel from Lois’ debacle?

To the credit of the hotel’s General Manager, late that Friday evening, I worked with him and food & beverage (F&B) manager for over an hour looking at possibilities to make the next day’s presentation work, even though it was to be in the hotel’s restaurant, during service hours to the general public. The hotel general manager explained to me that he, and his staff had been working on the problem for the past three days. They had even called other hotels to try and move the meeting—but without success. Further exhibiting the real cost of mediocrity.

Let’s take a rough look at the real cost of mediocrity to this hotel:

A hotel general manager making around $100,000 a year, working a six-day work week equates to about $333 per working day. If we take into account that the general manager, food & beverage manager, sales staff and others had been dealing with the issue for three days and just add up the general manager’s pay, that gives us about $1,000 cost to the hotel. I’m sure Lois’ commission on the sale of the room and F&B was nowhere near that much.

Now let’s add in the damage to both the national brand and that particular location. This group happened to be a gathering of local-area professional speakers. Since many are intimately familiar with hotels, their expectations tend to be a bit higher than most. What will they say to local meeting planners about this hotel? I doubt it would be complimentary. If the approximately 50 professional speakers mention the situation to only one meeting planner over the following year—that’s potentially 50 local meeting planners that have received a poor report about this property. What’s the cost of that?

If only one of those 50 meeting planners decided not to book a meeting at that property based on what they heard, how many thousands of dollars would that property not receive in future revenue because of Lois’ behavior? Let alone the tarnished perception of this particular brand nationally could cost the chain dollars. Surely it would be more that Lois’ commission on that particular room, on that particular Saturday.

The Rest of The Story

This had been the second time that this property, or should I say Lois, had pulled this kind of situation on that particular NSA Chapter. As such, the board of directors immediately decided to start looking for another property at which to hold their monthly meetings. By the next month’s meeting, the chapter had already found a new home for their monthly meetings. That adds even more to the real cost, as the revenue from the chapter was valuable to the hotel during slow times.

Gosh, because that farmer, Lois, was too unorganized, oblivious, lazy, apathetic, ignorant or greedy, the real cost to the hotel’s productivity and revenue was, and will continue to be, substantial. What does this mean to you? In selecting and/or maintaining the wrong people to represent your organization’s interests, you will pay dearly for their impoverishment of skills.

The TEA Master Key should prove helpful. The three key areas necessary to explore in serving your customers well are: Training, Ego and Attitude.

Training your employees well is a given, the subtleties are in their understanding the DNA of your organization’s culture and an advanced understanding of how to most effectively use the “tools” that you have made available to them. Understandably, this takes time, but few companies devote the necessary hours to this endeavor. And, if your employees are not continually learning, you must re-examine the limited value they deliver to your organization.

Ego is good, when kept in check, allowing one to be confident, yet not arrogant. Unfortunately, too many employees let their ego get in the way of their performance, i.e. too much ego that they never admit a mistake. Mistakes are good, if one learns from their mistake. Years ago, Ray Kahn would say, “If you are not making mistakes, you are not learning, and I don’t need you. But, if you do not learn from your mistakes, I don’t need you either.” Other ego issues revolve around one’s need to be right! In serving customers, it is more important to get things done, than to focus on being right.

Developing Strategic Alliances–What’s In It for Me? (2513 words)