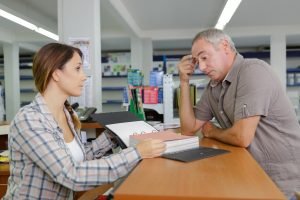 Bad customer service serves nobody. The following is a true story. It illustrates the need for even management to be nice to their customers—for a variety of reasons.

The brothers Long started a drug store in Northern California a number of years ago. By the 1970’s they had built a respectable chain in the north and had started expanding to Southern California. For years, when I was in the sunglass business, I sold to this glowing chain. Throughout the 1970s and 1980s they grew and I sold sunglasses to most of their stores. I really appreciated the amount of business I earned from them over the years. Also, over the years, the department heads that I worked with in the early days became store managers and one, a district manager.

With all of that being said, one day in the late 1990s I visited my local Longs Drug Store (now owned by CVS) store to return a camera that I had purchased that turned out to be defective. It was an evening and I ended up getting help from the store’s assistant manager. While she did not remember me, I remembered when she was a clerk in the cosmetic department. She told me that she could not replace the camera because she did not have that EXACT one in stock. She told me to ship it to the factory and they would take care of it.

After selling sunglasses to this chain for almost two decades, I was reasonably familiar with their return policy. It was less the fact that she told me to send the camera back to the factory, but more her attitude. I knew that she had the authority to do pretty much anything she wanted to do to take care of the situation. She could have given me a refund. She could have given me the same brand camera but the next model up, which she did have in stock. But rather than to serve a customer that had been shopping at the store since it had opened, about 10 years before, she selected to have an attitude (the big A in Ego Attitude Training).

I didn’t make a fuss about her lack of customer service—instead I simply left the store with my defective camera in hand. Unfortunately for this assistant manager, she decided to (in my opinion) to screw over, a longtime customer who coincidentally knew her boss’ boss pretty darn well. In fact, I had served Ron, the district manager, as a vendor to the chain for about 20 years. She made a BIG MISTAKE!

Because my personal relationship with the chain (a number of people from clerks to executives) was much stronger than any single employee, I mailed a friendly letter to Ron explaining the situation. I told him that my relationship was with the store, and not the manufacturer. I also mentioned my thoughts on customer retention and a couple of other thoughts. I did not ask him to take action, but simply informed him about the behavior of one of his managers.

It took a few weeks, but wow! The letter of apology from this assistant manager was amazing. Not only did I receive the apology but also it came with $20 worth of store script (about the retail difference between the defective camera I wanted adjusted and the next model up). Also, in her letter was the pledge that if I brought my defective camera in the store she would personally exchange it, even if she had to upgrade it.

I never took her up on her offer to exchange the camera but instead just left her wondering if I’d ever come back. No need to in that situation, the camera was a great brand and I had sent it to the manufacturer myself the next day. Within a week, the manufacturer had mailed me a replacement. I did though use the store script—heck, why not?

Ron, the district manager, is a really great guy so I’m sure he didn’t rip the assistant manager’s head off—at least too much. But I must admit, I would have really enjoyed being a fly on the wall at that meeting. Is the moral of the story to be nice to people who know your district manager? I don’t think so. How could one ever know?

Just be wonderful to every customer—just because you should. Besides, you never know whom they know. Being crummy to any customer could prove to be a career killer—you just never know!