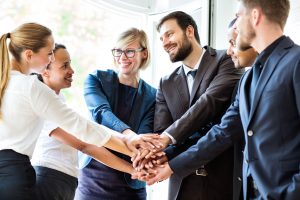 Every organization wants high performance teams. Sam Walton, Founder of Wal-Mart, said in his autobiography, “The associates did it [the Wal-Mart Cheer] for President and Mrs. Bush when they were here in Bentonville not long ago, and you could see by the look on their faces that they weren’t used to this kind of enthusiasm.” Would you like to have your staff enthusiastic about coming to work and serving your customers? If so, outlined in this article are many elements necessary to build your high performance teams.  Partnering with your employees is the window through which to view all that follows.

Leading the charge is the most important element in partnering with your employees to build high performance teams. When I was a child, my mother would say, “Do as I say and not as I do.” Which choice do you think I made? Sure, I’d do as my mother ‘did’ and frequently got in trouble for my actions. If this scenario sounds familiar, you better change your approach. “Be sure you’re prepared to live the values you profess. Your people will ‘hear’ what they ‘see,’ not what you say,” says Dan McNamara, Senior Vice President at Mitsubishi Motor Sales of America.

If you want to lead  high performance teams, you must lead by example. One way to lead by example is to exhibit self-confidence. You can show that you are a confident leader. Be a leader who has personal power rather than to be concerned with the title on a business card. Show this by delegating tasks and responsibilities to your team members. Delegate in a way that builds alliance relationships so team members become interdependent with one another rather than dependent or independent. Listed below are some tips for high performance partnering delegation:

This idea starts with attitude and a willingness to make Relationship Bank Deposits. Similar to the cash deposits you regularly make to your company’s checking account at your local bank. Without these deposits you cannot make withdrawals to pay your suppliers. There are two basic types of deposits you can make, those with strings attached and those that are unrestricted. It is understood that the latter are the ones that will allow you to make future withdrawals.

In team dynamics, members can have a buy-in or an ownership in the plans for success. Like the executives at Mitsubishi Motor Sales found out, buy-in does not necessarily lead to success while ownership generally does. If you and your team members intellectual understand what must be done to build a partnering alliance environment but have not yet developed an emotional ownership at the core of your being; chances are that the team will not be as successful as possible. A commitment to participation is essential along with the need for all involved to also commit to have fun. If things get too dull, your team will loose their edge and bickering will follow.

Element #5 – Be Vigilant with Consistent, Professional Performance and Behavior Standards

Take out a piece of paper and start listing the standards of performance you want all of your team members to follow. Offer them as a start to the team and invite them to add to and modify your list. Once the team has come to a consensus, print out the list and have the individual members (including you) sign the document. Give each team member a copy and post the original in a location where the team regularly meets. They will have more than a buy in; they will have an ownership in the standards of performance they helped to create. They will embody high performance teams.

What is the value of withholding information? Generally the answer is power, the power over others. This is not the behavior of a leader, a person who derives their power from the person they choose to be. This is the behavior of a boss with low self-esteem who believes they will be diminished if they share information (power).

What might be the value of information sharing…high performance teams. The list goes on and on; communication, productivity, comfort, security, feeling good about the workplace just to name a few. During the first six months of 1995, I did an informal survey of hundreds of working people who attended my seminars across the country. The attendees ranged from entry level to executive level. I asked them to write one thing their company could do to improve their loyalty to the company. The replies that I most frequently received were: praise, recognition, communication, comfort, security and feeling good about the work they did. Do you see any similarity to the lists?

Feedback is an important part of open communication. Try the Three-on-three method I learned from my mentor, Patricia Fripp, is an excellent way to build a partnering relationship with your team members. This is truly making relationship deposits, the right kind. Here is what you do.  Start with the team member that you get along with the best. Ask them to tell you three things they do not like about the way you lead the team. After each response, answer with nothing more than, “Thank you.” Then ask them to share three things they do like about how you lead, answering again with only, “Thank you.” Get back with them in a week or two and review your progress so they will know they were doing more than talking to a brick wall. Do this with each team member once a quarter and within a year you will be amazed just how open the communication is within your team.

The difference between praise and recognition is that praise should be, from your heart to theirs, and in private while recognition is usually done in public. Delivering the correct choice goes a long way in developing high performance teams.

Keys to Praise and Recognition:

Celebration in a natural human activity, it is the payoff for all the hard work.  Sure everyone wants money but in my survey, it was far from being the motivator many think it might be. Celebrate achievement, positive results and phase completion or reaching a new plateau. A celebration can be as simple as a box of donuts during a break or as grandiose as a trip over seas. No matter the type of celebration, celebrate soon and often.

Believe in your team as Sam Walton did if you truly want to partner with your staff, employees, associates or team members to build a high performance team. In the postscript to his father’s book, Rob Walton, chairman, Wal-Mart Stores, stated, “President Bush and the First Lady would be traveling to Bentonville to present the metal [Presidential Metal of Freedom] to Dad, and he was thrilled by the honor. At such an occasion, of course, Dad could have invited anyone he wanted to attend the ceremony, but we hardly had to ask whom he wanted to be there with him: his Wal-Mart associates.” Sam was an integrity partner with his associates. You can do the same if you simply make the same choice as Sam.