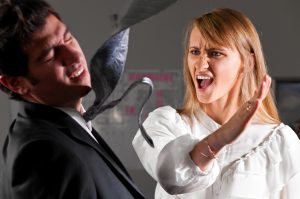 When Opportunity Knocks, Do You Create Raging Fans or…

Not long ago, I found myself at the Four Seasons in Scottsdale, AZ. I was meeting a friend for a cigar, he had called ahead to confirm their “cigar bar” advertisement about having an indoor location for smoking. When I arrived, I found my friend sitting outside and just a bit agitated. It turned out that the hotel employee he talked to had given him the wrong information, as was their advertisement incorrect.

A Raging Fan Opportunity Arose, What to Do?

During our first five minutes together, two hotel managers (separately) visited us to apologize for the oversight. The second offered to cover our first round for the inconvenience both of us experienced in driving 20 minutes out of our way to visit the Four Seasons indoor cigar bar, which did not exist.

The conversation we had while enjoying our complementary drinks was that at least they, the management at the Four Seasons, made an effort to do something to make us fans rather than enemies. Perhaps not raging fans, but we were at the least, satisfied with the outcome. However, we did not select to stay at the hotel for dinner but rather selected a local chop house. The situation was neutralized, but for the Four Seasons, they lost our dinner business.

I’m sorry you didn’t receive your baggage as expected when you traveled with us April 30. We know how frustrating it is for our customers to be without their belongings and we continually look for ways to improve and refine our baggage handling procedures to minimize such experiences.

I know, too, it was disappointing to discover that your belongings were damaged. While we work very hard to avoid these mishaps, unfortunately, they do sometimes occur. When this kind of difficulty happens, every effort is made to make amends in a reasonable manner. However, as previously explained, our conditions of liability exclude any damage claim not initially reported in person within 24 hours after the receipt of your checked items.

Mr. Rigsbee, I know my response will disappoint you. Nevertheless, we do have very specific policies and procedures concerning baggage liability, and we are unwilling to make an exception in your case. We hope in time you will understand our position and again choose American for your travel.

This is an “outgoing only” email address. If you ‘reply’ to this message by simply selecting the reply button, we will not receive your additional comments. Please assist us in providing you with a timely response to any feedback you have for us by always sending us your email messages via AA.com.”

Wow! American Airlines had a Chance and They Squandered it!

Let’s explore the situation. Could raging fans be developed? They fail to get my bag to LAX when it is supposed to be there. They then deliver it to my home in damaged condition. I’m out of town and my wife calls American’s baggage information telephone number and they refuse to handle the situation, tell her to call American Airlines at LAX. She does so and gets only a recording stating that the damaged bag will have to be brought back to the airport within 24 hours (one-plus hours drive each direction). She gives up, believing that my brand spanking new, $150 bag, is just not worth that kind of hassle. What would you do?

I return home a couple days later, call the same baggage information number and talk to a nice lady by the name of Jane Middleton. I asked for a supervisor and Jane told me that she was one. However, Jane had no power to make a decision, or raging fans, and repeatedly told me about their “guidelines.” Funny thing is that she never asked me this simple but powerful question, “What would you like us to do for you?” I told Jane that her boss’ boss could handle the situation. She told me that “she” probably could but “she” doesn’t take phone calls.

I then sent several emails to American Airlines and you saw above the only response—basically a nice “take a hike” letter. And did you notice that American Airlines does not even allow me to reply to their note? Is that how you develop raging fans? If I want to communicate with them I have to go to their web site and go through the entire process again. They are truly hiding behind the internet.

What Could Have American Airlines Done to Win a Raging Fan?

The simplest solution would have been for American Airlines to offer me some of their “funny money,” their travel vouchers to make me a raging fan. The reality is that many people never use the flight voucher credits or if they do, it is to buy a more expensive ticket. The real cost to American Airlines for that kind of solution would be approximately zero dollars. But, Jane never asked what I wanted; she just kept on telling me about the guidelines. Guidelines and not policy? Hmmmm!

Will I ever fly with American Airlines again? Sure I will. Some day, a time will that they are the only game in getting me to a particular location I need to visit. However from this point on, they will be my LAST choice.

The Rest of the, No Raging Fans, Story

I was flying on American Airlines instead of my favorite airlines, United, because I meet an American Airlines meetings department salesperson at an event a couple months earlier and she was working hard to develop raging fans for her airlines. She was pushing me to sign up with American to make them the preferred airline for a meeting that I’m organizing for the end of the year. So, I gave American a chance. I’ll tell you this much, since I am the one that makes the decision, American Airlines will NOT be the airline partner for my coming meeting.

American Airlines choice to snub me is a legal one. However along with being immoral and unethical; it was also financially stupid! Because they hosed me on taking care of a $150 bag that they neglectfully handled and damaged (shattered the back support)—I, the consumer vote with my dollars and they will not get the meeting deal, or any other future meeting deals, or much of my personal business in the future. What’s that going to cost American Airlines for making a different choice in the area od developing raging fans?

How Does this Apply to You Developing Raging Fans?

You are most likely either fuming because you had a similar experience with American Airlines or another carrier. No raging fans there. Or, perhaps you are thinking that your company would never be so penny wise and dollar foolish? Here is the rub; are ALL of your employees trained and empowered to make intelligent customer service decisions? I would bet against that being the case in most situations.

At the Four Seasons in Scottsdale, the “supervisor” had the authority and decided to use that authority to keep patrons happy, create raging fans, or at least satisfied. Let’s face it, how much is their real cost for a couple of drinks? In contrast at American Airlines, the “supervisor” either had no authority or just simply hid behind company guidelines. And what would have been the real cost for American Airlines to do the right thing? Their “funny money” costs them nothing.

I encourage you to have sporadic private meetings with your employees and lay out an easily anticipated scenario. Ask them how they think you would want them to handle the situation. If their answer is the correct one, acknowledge them for knowledge in your organization. If it is the wrong answer, take it as a training opportunity rather than to rebuff them. Help your employees to understand the value of seeing the big picture in business. Empower your employees to create raging fans for your business.

Loyalty, Want it, Give it First (446 words)
Scroll to top